York Region is moving forward with plans to build an eight storey headquarters at the corner of Yonge Street and Eagle Street in Newmarket.

The project has been several years in the making. In 2005, council approved the Accommodation Master Plan which recommended the construction of the facility – called the York Region Administrative Centre Annex in order to manage long term growth needs.

The 422,000-square-foot facility will be located next to the region’s existing administrative headquarters. 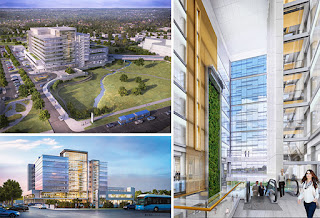 The construction of the Annex will realize York Region’s long-term plan to consolidate a variety of community, health and courts services facilities from a variety of aged satellite locations throughout Newmarket into one centrally-located, fully accessible modern facility.


Once complete, this eight-storey, 422,000-square-foot facility will offer a variety of public services, such as:

"We are against the project we look at it like a vanity project," said Maddie DiMuccio who argues the money should be spent on infrastructure. "There's a lot of communities in York Region, nine municipalities that need money so that people can live."

The region’s staff projects a $26 million savings over a 30 year period by consolidating the services currently offered at satellite locations.

"It will also reduce the number of leases that we have and in the long run it is the prudent financial decision," said Michael Shatil, Director, Property Services Branch.

York Region recently awarded a construction contract to EllisDon Corporation in the amount of more than $172 million.

Construction is expected to be completed in 2020.